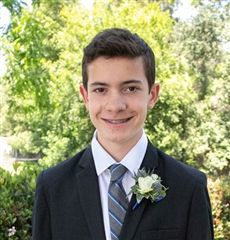 Well-Rounded with Skills for Success
I’ve been at Clairbourn since pre-K and I’ve made a lot of memories here. I remember instantly liking Clairbourn, and I have made many friends that…I will remember for the rest of my life.
In Kindergarten, I learned to always include people in what you’re doing and to share. In PE, I learned to play fair and not cheat. Some of my fondest memories from Clairbourn are going to Australia and being part of the CAST [drama] productions. In Australia, I learned about the culture and had a really good time getting to know my host family and seeing kangaroos up close. In CAST, I performed in three Shakespeare plays and was even Owl in the Winnie-the-Pooh play, which helped me get over my stage fright. These are great examples of Clairbourn helping me become a well-rounded person.

Going into middle school, I was nervous. I had also been told about the legend of Mrs. Taylor’s homework. Legend says that, sometimes, it would take over six hours to finish. Others said that the sheer amount of homework could literally crush you. When I got to middle school, I found out that it wasn’t too bad as long as you managed your time wisely. That is one valuable lesson that I will never forget: time management. I’ve learned so much at Clairbourn, and, after eleven years, it feels weird to be moving on, but at the same time I am excited to start the next chapter of my life.
Back